Foreign Minister Mangala Samaraweera unveiled a range of reconciliation measures yesterday at the UN Human Rights Council in Geneva, two days before the release of a long-awaited report on alleged war crimes during the battle against Tamil terrorism. 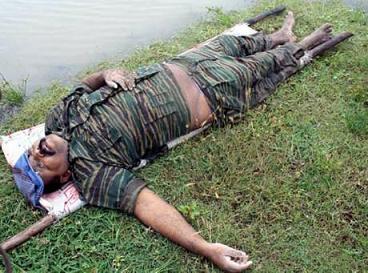 (Pictured, the head of the Tamil terrorist group, Liberation Tigers of Tamil Eelam Vellupillai Prabhakaran, was slain in May 2009, ending the 30-year terrorist scourge in Sri Lanka)

But Tamil leaders said the incumbent unity government’s plans for a truth commission and an office for war reparations were not enough.

“The minister tells us to have confidence and trust them. But he himself acknowledges that their track record is not good,” said Suresh Premachandran from the Eelam People’s Revolutionary Liberation Front.

“That is why we say: have an internationally independent inquiry.”

“You can’t just pay compensation and forget about it. We need a credible political solution,” said Sithadthan, leader of the Democratic People’s Liberation Front.

Prime Minister Ranil Wickremesinghe, who presides over an unprecedented 43-member cabinet, said today the plans aimed to resolve reconciliation issues so that “all Sri Lankans are treated equally” and ”together we look at the future.’’

A former Norwegian peace envoy to Sri Lanka, Eric Solheim, also welcomed the plans, saying on Twitter that they would be a “sea change for Sri Lanka” if implemented.—AFP

Posted on September 15, 2015, in Sri Lanka. Bookmark the permalink. Comments Off on Sri Lanka’s Tamils dig in on terrorist war inquiry.