Sirisena, Ranil Get Set to Face Threat from Rajapaksa 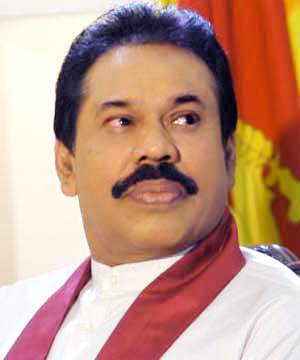 COLOMBO: Shaken by the successful rally staged by pro-Mahinda Rajapaksa elements at Nugegoda on February 18, Sri Lankan President Maithripala Sirisena and Prime Minister Ranil Wickremesinghe are girding up their loins to face a perceived threat from the former President in the June parliamentary elections. 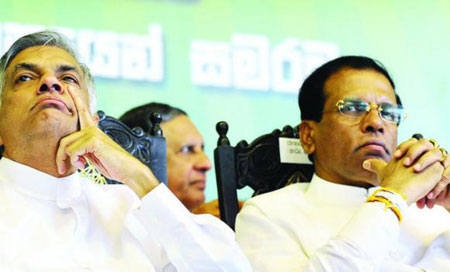 Alarmed by the fact that some MPs of his Sri Lanka Freedom Party (SLFP) had attended the rally, Sirisena called a meeting of party MPs and reprimanded those who attended the rally and the leaders who allowed party men to attend it.

To keep his flock of MPs from fleeing to Rajapaksa’s camp and also to attract MPs and others from the opposite side, Sirisena proposed the formation of a National Government or an enlarged multi-party government. News reports on the meeting did not say whether the MPs were in agreement with Sirisena on this question, but the President’s Office put out a statement saying the MPs had agreed to a National Government.

Later, Health Minister Rajitha Senaratne said that in the proposed National Government, the size of the cabinet will be expanded from 27 to 45, and the number of non-cabinet ministers will go up by 55 (presently non-cabinet ministers number only 17). The poll promise of downsizing the council of Ministers has been sacrificed at the altar of political expediency.

In a recent interview to New York Times, Prime Minister Wickremesinghe revealed that Sirisena does not intend to give Rajapaksa an SLFP ticket to fight the parliamentary election, though the former President is a “Patron” of the party.

Reacting to a barb from the Rajapaksa camp that Wickremesinghe and his United National Party (UNP) have no right to be in the government when the UNP has only 49 MPs in a House of 225, Wickremesinghe has pointed out that Sirisena won the Presidential election in alliance with the UNP, along with a public pledge to make him PM.

The Sirisena-Wickremesinghe group also thinks that early parliamentary polls will be to its advantage. Hence the decision to go for mid-term polls in June, although parliament has one more year to go.

Comments Off on Sirisena, Ranil Get Set to Face Threat from Rajapaksa

When the FBI sabotages the efforts of consumers and businesses to secure their data through encryption, the agency is essentially attacking the security foundations of the online world created over the past 20 years. (Youtube photo) As Google’s Android smartphone operating system was coming under attack in fall 2012 from malware with the colorful names of “Loozfon” and “FinFisher,” the FBI’s Internet Crime Complaint Center issued an alert to help defend against the threat. “Depending on the type of phone,” the FBI said, “the operating system may have encryption available. This can be used to protect the user’s personal data.”

How times have changed.

Last fall, when Apple and Google announced they were cleaning up their operating systems to ensure that their users’ information was encrypted to prevent hacking and potential data loss, FBI Director James Comey attacked both companies. He claimed the encryption would cause the users to “place themselves above the law.”

The tech community fired back. “The only actions that have undermined the rule of law,” Ken Gude wrote in “Wired,” “are the government’s deceptive and secret mass-surveillance programs.”

The battle resumed in February 2015. Michael Steinbach, FBI assistant director for counterterrorism, said it is “irresponsible” for companies like Google and Apple to use software that denies the FBI lawful means to intercept data.

Yet the FBI does have a lawful means to intercept it: the Foreign Intelligence Surveillance Act. Its scope was vastly expanded by Congress in the wake of the 9/11 attacks.

It’s worth noting that the FBI never asked Congress to force tech companies to build “back doors” into their products immediately after the 9/11 attacks. Only after Google and Apple took steps to patch existing security vulnerabilities did the bureau suddenly express concern that terrorists might be exploiting this encryption.

In fact, the bureau has a host of legal authorities and technological capabilities at its disposal to intercept and read communications, or even to penetrate facilities or homes to implant audio and video recording devices. The larger problem confronting the FBI and the entire U.S. intelligence community is their over-reliance on electronic technical collection against terrorist targets.

The best way to disrupt any organized criminal element is to get inside of it physically. But the US government’s counterterrorism policies have made that next to impossible.

Overseas, the Cold War style of spying – relying on US embassies as bases from which CIA and other US government intelligence personnel operate – is increasingly difficult in the areas of the Middle East and southwest Asia undergoing often violent political change.

Steinbach testified about this before the House Homeland Security Committee earlier this month. “The concern is in Syria,” he explained, “the lack of our footprint on the ground in Syria – that the databases won’t have the information we need.”

Notice his reference to technology “databases” rather than the importance of the human element. The US intelligence community’s emphasis should be on the spy on the ground who actually gathers critical information and makes any penetration of a terrorist organization possible.

This problem is true for Yemen as well, as a recent “Washington Post” story highlighted:

“The spy agency has pulled dozens of operatives, analysts and other staffers from Yemen as part of a broader extraction of roughly 200 Americans who had been based at the embassy in Sana, officials said. Among those removed were senior officers who worked closely with Yemen’s intelligence and security services to target al-Qaeda operatives and disrupt terrorism plots often aimed at the United States.”

The CIA’s failure to field agents under nonofficial cover, or to recruit enough reliable local informants on the ground who could communicate securely with CIA handlers outside Yemen, is symptomatic of the agency’s failure to break with its reliance on embassy-based operations throughout that part of the world. Compromising encryption technology will do nothing to solve the intelligence community’s human-intelligence deficit. This is a problem the agency must address if it is ever going to be successful in finding and neutralizing terrorist cells overseas.

It boils down to the fact that the FBI and the US intelligence community have failed to adapt their intelligence-collection practices and operations to meet the challenges of the “new world disorder” in which we live. As former CIA officer Philip Giraldi has noted:

” Intelligence agencies that were created to oppose and penetrate other nation-state adversaries are not necessarily well equipped to go after terrorists, particularly when those groups are ethnically cohesive or recruited through family and tribal vetting, and able to operate in a low-tech fashion to negate the advantages that advanced technologies provide.”

The CIA has repeatedly attempted – sometimes at high cost – to penetrate militant organizations like al Qaeda and Islamic State. Nonetheless, Washington’s overall counterterrorism bias in funding and manpower has been toward using the most sophisticated technology available as the key means of battling a relatively low-tech enemy.

The FBI’s new anti-encryption campaign is just the latest phase in the government’s attempt to deny Islamic State and related groups the ability to shield their communications. If these militant groups were traditional nation-states with their own dedicated communications channels, we’d all be cheering on the FBI’s efforts. But the Internet has become the primary means for global, real-time communications for individuals, nonprofits, businesses and governments. So it should not be treated as just another intelligence target, which is certainly the FBI’s and Natural Security Agency’s current mindset.

Using the legislative process to force companies to make defective electronic devices with exploitable communications channels in the hope that they will catch a tiny number of potential or actual terrorists is a self-defeating strategy. If implemented, the FBI’s proposal would only make all Americans more vulnerable to malicious actors online and do nothing to stop the next terrorist attack.

When the FBI sabotages the efforts of consumers and businesses to secure their data through encryption, the agency is essentially attacking the security foundations of the online world created over the past 20 years. Last year, total global online business-to-consumer sales were nearly $1.5 trillion. That figure is expected to pass $2 trillion in just a few years’ time. Encryption of those transactions is vital to the long-term success of the global online marketplace.

Can Samsung weather it out? 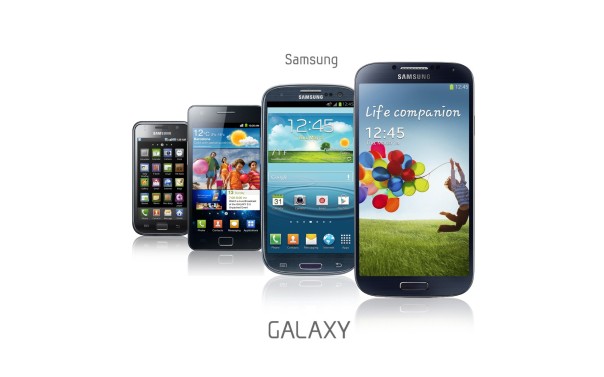 South Korea’s iconic company Samsung has run into turbulent weather. This is the company that challenged Apple products and rode on the “android wave” in India and rest of the world to claim number 1 spot in many a mobile devices tally.

In February 2015, most analysts and market research firms released 2014 trackers recording a slip in Samsung market position. It’s losing ground, is the refrain from just about every quarter, except an international consumer research firm called GfK, which actually happens to be a reputed brand name with international presence.

Samsung commissioned this research and has been using data from GfK to counter all research groups. These groups are literally screaming with delight about the impending decline of Samsung as new nimble players at price points more in tune with developing market realities flood the mobile phone and tablet market. The basis of all these arguments is the difference between tracking parameters. Almost all market-research firms in the sector track shipments, GfK data tracks retail sales.

Now, the question is: What is the probability that shipment figures can be grossly different from the ones aggregated from the retail sales data? When tracked over a reasonable time-period, like a year or so, shouldn’t these tally or at least be somewhat close instead of a huge differential that is getting thrown around in the media reports? Moreover, broadly speaking, in case of a mismatch, shipment figures should generally be higher than the retail sales figures.

One reason of the mismatch, cited by Samsung is coverage of distribution and retail points. The Samsung statement said the coverage is inadequate for research agencies and that perhaps is the reason of the anomaly. If I were to give this argument to my colleagues at Cyber Media Research, who also track the handset market the argument will not really find feet, as sample sizes are indicative enough and even if there is a margin of error, it cannot be a very wide margin, as claimed by Samsung.

The other possibilities for this mismatch include a market flush with counterfeit handsets, which may not be the case. The turbulence for Samsung continues. The company needs to clear the air around this, instead of entering into data wars with the analysts.

It obviously is a matter of survival and growth for Samsung, in the face of tough competition from brands unheard of. New players continue to enter fray and elsewhere in the world there have been instance of a rank new player rising to the top of market in just three years. Whoever said staying No 1 is easy.

The many-million-dollar question is: Can Samsung weather it out with an India strategy? It’s time. Move fast. Clear the air and answer the question, Samsung.

Comments Off on Can Samsung weather it out?