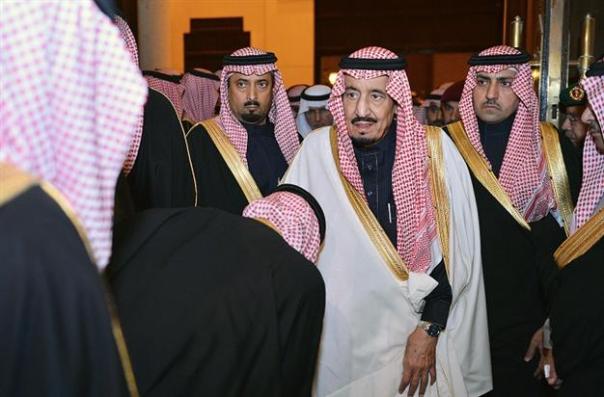 Dignitaries and leaders from around the world were to arrive in Saudi Arabia today to offer their condolences to its new King Salman, a day after the death of his half-brother King Abdullah.

British Prime Minister David Cameron, Prince Charles and French President Francois Hollande were among the first leaders expected while US Vice-President Joe Biden was due to visit in the coming days.

Abdullah, a cautious reformer who led the US-allied Gulf state through a turbulent decade in a region shaken by the Arab Spring uprisings and Islamic extremism, died early yesterday aged about 90.

Since he took the throne in 2005, Riyadh has been a key Arab ally of Washington, last year joining the coalition carrying out air strikes against the Islamic State jihadist group.

World leaders praised the king as a key mediator between Muslims and the West, but campaigners criticised his rights record and urged Salman to do more to protect freedom of speech and women’s rights.

The late king’s body, wrapped in a cream-coloured shroud, was borne on a simple litter by members of the royal family wearing traditional red-and-white checked headgear.

The body was quickly moved to nearby Al-Od public cemetery and buried in an unmarked grave, in keeping with tradition.

In the evening hundreds of Saudis queued to enter a royal palace where they rubbed cheeks and kissed the hands of their new leaders, in a symbolic pledge of allegiance.

Officials did not disclose the cause of Abdullah’s death, but the long-ailing ruler had been hospitalised in December with pneumonia.

President Barack Obama was quick to pay tribute to Abdullah yesterday as a “valued” ally, and the State Department said Washington saw no indication that cooperation would change.

Biden said on Twitter he would lead a delegation to Saudi Arabia “to pay respect and offer condolences”.

Salman vowed yesterday to keep the conservative, oil-rich Muslim kingdom on a steady course and moved to cement his hold on power.

In his first public statement as king, Salman, 79, vowed to “remain, with God’s strength, attached to the straight path that this state has walked since its establishment”.

COLOMBO: The new Maithripala Sirisena government in Sri Lanka is to reduce China’s involvement in the island nation’s economy to cut corruption which had attained gargantuan proportions in the Mahinda Rajapaksa era, the Minister of Finance, Ravi Karunanayake has said.

“The economic presence of China needs to be reduced to eliminate corruption. We are not specifically against anybody. If China can give us loans at 0.5 percent we would love to take them, but not at 8 percent. Four to five percent went into the pockets of certain individuals and two or three family members,” Karunanayake told Daily Mirror on Saturday. He was referring to the loot allegedly cornered by the Rajapaksa family.

According to the Dr.Harsha de Silva, Deputy Minister of Policy Planning, Chinese projects cost three times more than Japanese funded ones. The Chinese built railways were four times costlier than the Indian built ones. For example, the Kadawatta-Kerawelapitiya stretch of the Outer Circular Road in Colombo built by the Chinese, cost LKR 7.3 billion per kilometer. But the Japanese funded Kottawa-Kaduwela stretch cost only LKR 2.4 billion per km.

De Silva further said that the US$ 1.3 billion Chinese built Hambantota harbor, and the US$ 300 million Mattala airport, are both unusable. On top of all that, the Rajapaksa government agreed to projects worth US$ 1.2 billion during President Jinping’s visit last year.

The Sirisena government is reviewing the Chinese funded Northern Highway Project and the US$ 1.5 billion Colombo Port City project built on reclaimed land.

Built by the China Communication Construction Company (CCCC), the Port City project envisages the leasing out of a part of the sea bed and land to China. The new government says that the project had not gone through proper environment and strategic impact analyses. The Law of the Sea had been disregarded said one minister.

India had also objected saying that the Port City could be an observation post to snoop on Indian shipping in a situation where 70 percent of Colombo port’s business comes from Indian trans-shipment.

But CCCC said in a press release on January 22, that an environment impact study was done by the University of Moratuwa, approved by the cabinet, and published.

Expressing Beijing’s concern, the state-owned Global Times said: ” The Chinese side will suffer heavy losses if the US $ 1,.5 billion Colombo Port City project started in September, is halted. Given similar cases in Myanmar, this has triggered many concerns domestically.”

What Everyone Should Know About Managing Up

Having a healthy, positive relationship with your boss makes your work life much easier – it’s also good for your job satisfaction and your career. But some managers don’t make it easy. Bad bosses are the stuff of legend. And too many managers are overextended, overwhelmed, or downright incompetent – a topic that HBR has covered extensively over the years. Even if your boss has some serious shortcomings, it’s in your best interest, and it’s your responsibility, to make the relationship work.

HBR recently ran a special series on managing up, asking experts to provide their best practical advice for navigating this important dynamic. Together, these pieces provide a good primer on how to maintain an effective, productive working relationship with your own boss.

To start, consider the type of manager you have. Many pose a unique set of challenges that require an equally unique set of skills to handle. Perhaps you’re dealing with:

A brand new boss, someone you’ve never met before.

A manager you don’t see face-to-face because she works in another location
An insecure boss (hint: it’s important to know how to tame his ego)
An all-knowing or indecisive boss
A manager who gives you conflicting messages
A long-winded boss
A hands-off boss
A manager who isn’t as smart as you
A boss that’s actually a board of directors
No matter what type of manager you have, there are some skills that are universally important. For example, you need to know how to anticipate your boss’s needs – a lesson we can all learn from the best executive assistants. You need to understand what makes your boss tick (and what ticks her off) if you want to get buy-in for your ideas. Problems will inevitably come up, but knowing the right way to bring a problem to your boss can help you navigate sticky situations.

Best practices for interacting with your boss.

There will, of course, be times when you disagree with your boss, and that’s OK – as long as you’ve learned to disagree in a respectful, productive way. Still, despite your best efforts to build a good relationship, there may come a time when you’ve lost your boss’s trust. It happens. And while it may take some diligent effort on your part, it is possible put the relationship back on track, even if you feel like your boss doesn’t like you.

And if you scoff at all the talk of bad bosses and think, “I have a great boss,” be careful. It’s possible to like your boss too much. And being friends with your manager can be equally tricky. You don’t want your boss to be your only advocate at work. You need to find ways to demonstrate your worth to those above her as well.

Perhaps the most important skill to master is figuring out how to be a genuine source of help – because managing up doesn’t mean sucking up. It means being the most effective employee you can be, creating value for your boss and your company. That’s why the best path to a healthy relationship begins and ends with doing your job, and doing it well.

Comments Off on What Everyone Should Know About Managing Up

The 90-year-old Saudi monarch died today and was replaced by his brother Salman as the ruler of the world’s top oil exporter and the spiritual home of Islam.

Condoling the death of King Abdullah, US President Barack Obama hailed him as a “candid” leader who took bold steps in advancing the Arab Peace initiative.

“As a leader, he was always candid and had the courage of his convictions…One of those convictions was his steadfast and passionate belief in the importance of the US-Saudi relationship as a force for stability and security in the Middle East and beyond,” Obama said.

“He took bold steps in advancing the Arab Peace Initiative, an endeavour that will outlive him as an enduring contribution to the search for peace in the region,” he said.

UK Prime Minister David Cameron said the king would be remembered for his “commitment to peace and for strengthening understanding between faiths”.

Paying tribute to the late monarch, UN Secretary General Ban Ki-moon said he has left a “tangible legacy” that can still show the path towards peace in the Middle East.

Ban paid tributes to King Abdullah’s efforts to address regional and international challenges at a time of turmoil and rapid change, and to promote dialogue among the world’s faiths.

“As the driving force behind the Arab Peace Initiative, King Abdullah left a tangible legacy that can still point the way toward peace in the Middle East,” a statement issued by Ban’s spokesman said

Egyptian president Abdel Fattah al-Sisi hailed Abdullah as a wise leader who made historical contributions towards Arab solidarity and declared a seven-day mourning over his death.

King Abdullah was a major ally of the Egyptian government against Islamic extremism following the army’s ouster of president Mohammad Morsi in mid-2013.

Pakistan Prime Minister Nawaz Sharif and President Mamnoon Hussain also expressed condolences over the demise of the Saudi King and announced a day of mourning.

Sharif, referring to the mosques in Mecca and Medina, said the custodian of the two Holy Mosques had a special place in the heart of every Pakistani.