As snowstorms lashed Nepal’s Himalayan region few days ago, a five-year-old boy from New Delhi and his father stayed indoors at a small lodge in Pheriche, a village in the Everest region located 4371 meters above sea level. They were worried that the mission that they had set out to accomplish could get jeopardized midway. But the weather cleared two days later and they set out again towards their goal. 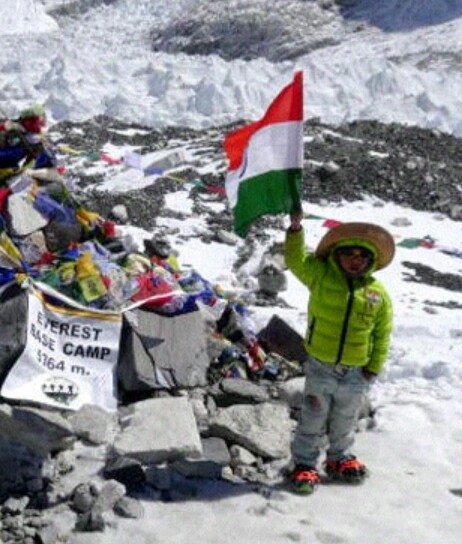 On Friday, Harshit Saumitra, a Class 1 student of GD Goenka School in New Delhi, reached the Everest Base Camp (5364 m), becoming arguably the youngest person to complete the difficult trek.

It took the child 10 days to cover the distance of 62km trek, many sections of which were covered by 5-7 inch of snow from the snowstorm caused by the tail-end of cyclone Hudhud.

“I felt very good. I unfurled the tricolor at the Everest Base Camp,” said Harshit at a press meet here after his return from the trek. He also climbed the Kalapathar (5550 m) peak located near the EBC.With this feat the child overtakes the record set by Aaryan Balaji, a seven-year old Indian boy who had reached EBC and Kalapathar peak in May 2012.

“We were worried that Harshit might experience altitude sickness. But he didn’t face any problem,” said the child’s father Rajeev Saumitra, a mountaineer who had reached the peak of Mount Everest (8848 m) last year.

The family plans to register the feat in record books like the Guinness World Records and the Limca Book of World Records by submitting the necessary proofs.

Harshit who climbed Rohtang Pass (3930 m) before attempting EBC has his eyes set on climbing Mount Kilimanjaro (5895 m) in Africa next and plans to attempt Mount Everest (8848 m) in a few years.